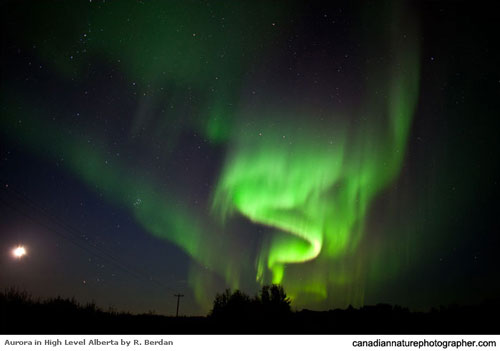 Aurora (astronomy) – Coloured light in the night sky near the Earth’s magnetic poles, called aurora borealis (‘northern lights’) in the northern hemisphere and aurora australis (‘southern lights’) in the southern hemisphere. Although auroras are usually restricted to the polar skies, fluctuations in the solar wind occasionally cause them to be visible at lower latitudes. An aurora is usually in the form of a luminous arch with its apex towards the magnetic pole, followed by arcs, bands, rays, curtains, and coronae, usually green but often showing shades of blue and red, and sometimes yellow or white. Auroras are caused at heights of over 100 km/60 mi by a fast stream of charged particles from solar flares and low-density ‘holes’ in the Sun’s corona. These are guided by the Earth’s magnetic field towards the north and south magnetic poles, where they enter the upper atmosphere and bombard the gases in the atmosphere, causing them to emit visible light. Northern lights is the name of a light phenomenon often seen in the northern regions. The lights have been around since Earth formed an atmosphere -the dinosaurs saw it, early humans saw it and our descendants will se it. The scientific name for the phenomenon is “Aurora Borealis”, aurora for short. This photograph of the southern lights or aurora australis, most commonly seen in southern New Zealand, was taken in September 2002 from Invercargill. It shows a typical red and green aurora, the nearly vertical rays tracing the earth’s magnetic field lines. The M?ori name for Stewart Island, at the south of the South Island, is Rakiura, which means ‘glowing skies’. This may allude to the aurora australis, or simply to the dramatic southern sunsets.

From space, the aurora is a crown of light that circles each of Earth’s poles. The IMAGE (below) satellite captured this view of the aurora australis (southern lights) on September 11, 2005, four days after a record-setting solar flare sent plasma—an ionized gas of protons and electrons—flying towards the Earth. The ring of light that the solar storm generated over Antarctica glows green in the ultraviolet part of the spectrum, shown in this image. The IMAGE observations of the aurora are overlaid onto NASA’s satellite-based Blue Marble image. From the Earth’s surface, the ring would appear as a curtain of light shimmering across the night sky. An aurora (plural aurorae/auroras) is an electro-static phenomenon, characterised by a bright glow and caused by the collision of charged particles in the magnetosphere with atoms in the Earth’s upper atmosphere. An aurora is usually observed in the night sky, particularly in the polar zone. For this latter reason, some scientists call it a “polar aurora” (or “aurora polaris”). In northern latitudes, it is known as the aurora borealis, which is named after the Roman goddess of the dawn, Aurora, and the Greek name for north wind, Boreas. Especially in Europe, it often appears as a reddish glow on the northern horizon, as if the sun were rising from an unusual direction. The aurora borealis is also called the northern lights since it is only visible in the North sky from the Northern Hemisphere. The aurora borealis most often occurs from September to October and from March to April. Its southern counterpart, aurora australis, has similar properties. Australis is the Latin word for “of the South”. Among the views of Earth afforded astronauts aboard the International Space Station (ISS), surely one of the most spectacular is of the aurora. These ever-shifting displays of colored ribbons, curtains, rays, and spots are most visible near the North (aurora borealis) and South (aurora australis) Poles as charged particles (ions) streaming from the Sun (the solar wind) interact with Earth’s magnetic field.

While aurora are generally only visible close to the poles, severe magnetic storms impacting the Earth’s magnetic field can shift them towards the equator. This striking aurora image was taken during a geomagnetic storm that was most likely caused by a coronal mass ejection from the Sun on May 24, 2010. The ISS was located over the Southern Indian Ocean at an altitude of 350 kilometers (220 miles), with the astronaut observer most likely looking towards Antarctica (not visible) and the South Pole.

The aurora has a sinuous ribbon shape that separates into discrete spots near the lower right corner of the image. While the dominant coloration of the aurora is green, there are faint suggestions of red left of image center. Dense cloud cover is dimly visible below the aurora. The curvature of the Earth’s horizon (the limb) is clearly visible, as is the faint blue line of the upper atmosphere directly above it (at image top center). Several stars appear as bright pinpoints against the blackness of space at image top right.

Auroras happen when ions in the solar wind collide with atoms of oxygen and nitrogen in the upper atmosphere. The atoms are excited by these collisions, and they typically emit light as they return to their original energy level. The light creates the aurora that we see. The most commonly observed color of aurora is green, caused by light emitted by excited oxygen atoms at wavelengths centered at 0.558 micrometers, or millionths of a meter. (Visible light is reflected from healthy (green) plant leaves at approximately the same wavelength.) Red aurora are generated by light emitted at a longer wavelength (0.630 micrometers), and other colors such as blue and purple are also sometimes observed.

What causes the showers of charged particles that create the northern lights?

Ultimately, the source lies in the solar wind, a fast-moving stream of particles constantly flowing from the Sun that carries the Sun’s magnetic field out into space. The solar wind, typically moving at 250 miles (400 kilometers) per second, flows past Earth’s magnetic field and molds it into an elongated bubble or cavity, compressing its sunward side and stretching its night side far beyond the Moon’s orbit. Under certain conditions, the solar wind’s magnetic field can merge with Earth’s, creating electrical currents that drive protons and electrons into the polar atmosphere. Powerful events occurring on the Sun can drive enormous changes in the solar wind, increasing both its speed and density and enhancing its effect on Earth.

Understanding just how Earth’s magnetic field responds to such events is now a focus of much solar and space research. We are increasingly dependent on technologies that are extremely sensitive to changes in the space environment, changes often collectively referred to as “space weather.” The story of Galaxy 4, a heavily used communications satellite, serves as a good example. At 22h UT on May 19, 1998, while in geostationary orbit above the central United States, Galaxy 4 lost its primary and backup attitude control systems. At the time, Galaxy 4 handled about 80 percent of all U.S. pager traffic. Controllers could no longer maintain a stable link between the satellite and Earth, resulting in a loss of pager service to an estimated 45 million customers. Researchers believe the incident occurred because a sequence of solar events about two weeks prior to the failure created an extremely energetic cloud of electrons that wreaked havoc with the satellite. 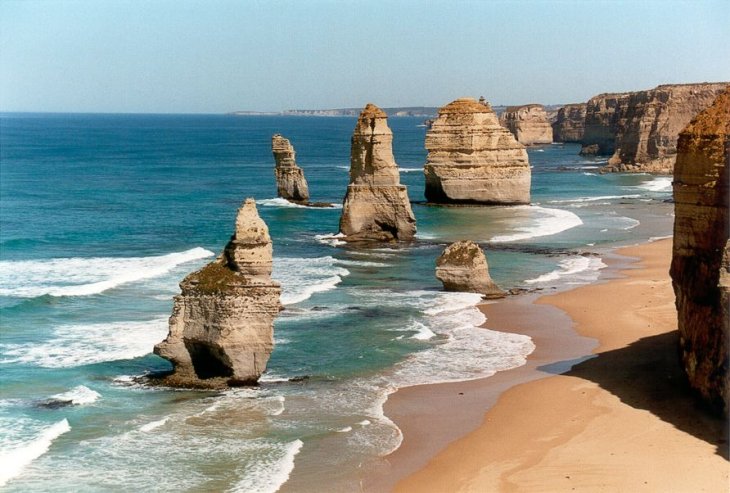