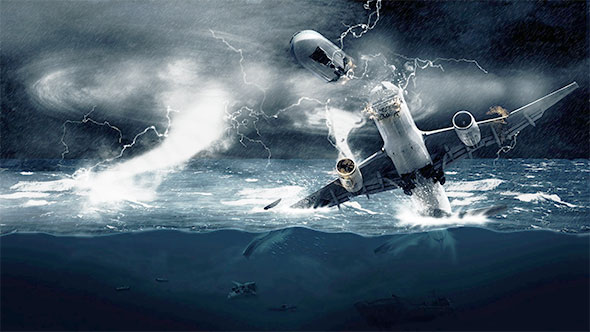 While such situations are rare, the puzzling disappearance of Malaysia Flight MH370 is not the first time a plane has vanished without a trace.

Here are few histories of missing planes and cases of mysterious plane disappearances and disasters. Some remain unsolved, decades later.

The Boeing 777 passenger jet vanished early Saturday, about an hour into its flight from the Malaysian capital to Beijing. There was no distress call before contact with it was lost over the sea between Malaysia and Vietnam. Search teams from various nations are combing the waters on the Malay Peninsula for traces of it, but so far, nothing has been found. The mystery over the fate of the jet and the 239 people aboard has baffled government officials and aviation experts. The Airbus A330 took off from Rio de Janeiro en route to Paris on May 31, 2009. A few hours later, as it crossed the Atlantic, it told control center its position. That was the last contact with the plane. Its last known position — two to four days by ship from the nearest ports — and the ocean’s depth hindered searches.

It took almost two years before the bulk of the wreckage, the majority of bodies, and the voice and data recorders were recovered. All 228 aboard died.
In 2012, French authorities said ice crystals disrupted the system used to determine the plane’s airspeed, causing the autopilot to disconnect. The plane plunged into the ocean.

Eleven years ago, a Boeing 727 vanished in the Angolan capital of Luanda.
The plane took off from the Quatro de Fevereiro International Airport on May 25, 2003, headed for Burkina Faso. It departed with its lights off and a dysfunctional transponder.

When the aircraft started taxiing down the runway, the control tower tried to make contact, but there was no response, and the tracking transponder was turned off. Ben Charles Padilla, an aircraft mechanic, flight engineer, and private pilot, was aboard N844AA when it was stolen, and is believed by U.S. authorities to have been at the controls.

There are conflicting reports on the number of people in the company jet, but flight engineer Ben Charles Padilla is believed to be one of them. Some reports say he was alone, while others say three people were aboard.
The plane has not been heard from since. Its whereabouts are unknown to this day.

Fifteen years ago, EgyptAir Flight 990 made a rapid descent, plunging almost 14,000 feet in 36 seconds. The 767 jet, en route to Cairo from New York City, crashed into the Atlantic Ocean off the Massachusetts coast. Though its debris was later found, speculation remains on the cause of the October 1999 crash that killed all 217 people aboard. Theories included a possible suicide by the pilot or co-pilot, complete with tales of a chaotic struggle for controls in the cockpit. Egypt said it was a mechanical failure. The Paris-bound plane exploded in midair shortly after takeoff from New York City,killing all 230 people aboard. Witnesses said they saw a streak of light and a fireball, leading to suspicions that terrorists struck the plane with a rocket. Others blamed a meteor or a missile. The National Transportation Safety Board ruled that the explosion was caused by an electrical short circuit, which detonated the fuel tank and caused the Boeing 747 to break into pieces in the waters off Long Island. Despite the explanation, conspiracy theories of a government coverup abound.

A chartered Uruguayan Air Force plane carrying 45 passengers and crew – including a Rugby Union team from Montevideo – crashed into the Andes mountains in bad weather. Of the 45 people on the plane, 12 died in the crash.

Six more died in the days afterward, and a further eight in an avalanche that ran through the plane’s wreckage, where they were taking shelter. The remaining 16 passengers only survived by resorting to cannibalism, feeding on the corpses of their dead friends. They were not found until 72 days after the crash, when two passengers made a ten-day trek across mountainous terrain, eventually finding a Chilean travelling salesman who gave them food and alerted authorities. The last 16 survivors were rescued on 23 December 1972, more than two months after the crash. The story was immortalised in the 1993 film Alive.

In 1947, a British aircraft vanished in the Argentine Andes after takeoff from Buenos Aires, headed to Chile.

After searches for the plane named Stardust turned up nothing for more than 50 years, conspiracy theorists jumped into action. But theories of aliens, among others, were invalidated in 2000, when the wreckage of the plane was found buried deep in a glacier.

The crash on August 2, 1947, killed 11 people, the BBC reported. Stardust’s final Morse code transmission was the word “STENDEC.”Decades later, the meaning of the word remains a mystery.

Flight 19 does not refer to a single plane, but to five Navy bombers that disappeared off the Florida coast on December 5, 1945.

A flight instructor flew one plane, and qualified pilots with 350 to 400 hours of flight time were in the others, according to the Naval History and Heritage Command. Radio transmissions indicated that the instructor got lost when compasses malfunctioned. Radio contact was lost before the exact problem was determined, and no traces of the planes were ever found. Adding to the mystery, a search aircraft sent to look for Flight 19 also disappeared. The patrol plane, which took off later that day, has not been seen or heard from since.  Flight 19 was reported in the area informally known as the Bermuda Triangle.

A stray Royal Air Force fighter crashed in the blistering sands of the Egyptian Sahara on June 28, 1942. Its pilot was never heard from again, and the damaged P-40 Kittyhawk was presumed lost forever. But in 2012, an oil company worker discovered it 70 years after the accident. Surprisingly, it was extraordinarily well-preserved, and most of its fuselage, wings, tail and cockpit instruments were intact. Back then, experts say, planes flew with basic supplies, so its pilot’s chances of survival were not good. The young pilot, according to Saunders, apparently became disoriented during the flight and headed in the wrong direction. Another RAF pilot flying nearby “tried all sorts of things” to get his attention, but Copping “bizarrely” ignored a series of warnings, Saunders said. By the time Copping realized his mistake, he was too low on fuel to turn around. Several pieces of evidence at the crash site — including a parachute believed to have been used as shelter from the sun — indicate the strong probability Copping survived the landing. He almost certainly could not, however, survive the blazing Sahara heat for long.

Copping “would have stayed by the aircraft initially,” Saunders noted. While the plane’s glass valve radio was likely knocked out of commission by the crash, “the parachute gives him shelter and a means to be identified from the air. The guy also would have had a little silver signaling mirror to attract passing aircraft and a pistol with a limited number of flares.” Why would Copping leave the wreckage? “Maybe he got desperate when he saw nobody was coming for him, and thought (the) only way to survive was to walk out” and look for help, Saunders speculated. RAF pilots in North Africa at that time didn’t have much in terms of rations. Copping’s supply would have been very limited, assuming he had food or water at all.    — Read More>>

The disappearance of Amelia Earhart is possibly the most famous unsolved aircraft mystery. The groundbreaking aviator was on her most ambitious flight, vying to become the first woman to fly around the world. In 1937, she attempted the voyage in her twin-engine Lockheed Electra. With about 7,000 miles left to go, she made a challenging landing at Howland Island in the mid-Pacific. Her radio transmissions became unclear, and the last thing she reported over her radio was, “We are running north and south,”according to her biography. After spending $4 million and searching 250,000 square miles of ocean, the U.S. called off its search. Many theories exist today, but her fate and that of navigator Fred Noonan remain unknown.

Note: the following is quoted  from http://www.theforbiddenknowledge.com/

A friend asked me to figure out the number of weeks between two “accidents”: the flights TWA 800 and Swiss Air 111.

Well, TWA 800 took off from JFK Airport on Wednesday evening, July 17, 1996, and exploded a few minutes later over the Atlantic Ocean, near Long Island. Swiss Air 111 took off from the same airport on Wednesday evening, September 2, 1998, and went down in flames into the Atlantic Ocean off the province of Nova Scotia, Canada. The number of weeks between these two accidents is exactly 111 (777 days), the same as the Swiss Air flight number. This is a very clear hoof print of the clandestine Luciferian Masons (CLuMs) who had sabotaged both airliners. Conspiracy investigators have long realized that another such sabotaged flight was Pan Am 103. This third doomed flight was brought down over Scotland on December 21, 1988. December 21 is the Winter Solstice, a very important CLuM holiday. Notice also that Pan Am 103 was destroyed over Scotland, whereas Swiss Air 111 met its end near Nova Scotia, i.e., “New Scotland”. Scotland is very important to CLuMs, since the Masonic Scottish Rite is the preeminent public Masonic body throughout the world.

The Scottish Rite (degrees 4 to 33) is also known as Red Masonry, as opposed to Blue Masonry, i.e., the lowest three Masonic degrees. Red Masonry has been associated with many blood-red conspiracies, such as the French Revolution of 1789 and the spread of Red Socialism and Communism throughout the world. Notice also that Pan Am 103?s flight number contains the digits of 13, the most Masonically correct number. What is even stranger is that the time between Pan Am 103 in December 1988 and TWA 800 in July 1996 is 7 years and 7 months: here we have an occurrence of the number 77, the mark of the revenge of Lamech. Lamech was a descendant of Cain, the first murderer, and father of Tubal-Cain, an important hero of the CLuMs. The Bible says the following about the mark of the revenge of Lamech:

“And Lamech said unto his wives, Adah and Zillah, ‘Hear my voice: ye wives of Lamech, hearken unto my speech: for I have slain a man to my wounding, and a young man to my hurt. If Cain shall be avenged sevenfold, truly Lamech seventy and sevenfold.’” (Genesis 4: 23-24)

Why a Teenage Girl Looks Like an Old Woman?